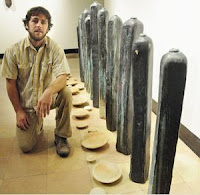 Fluid movement is beautiful whether in a human body or piece of art. The Morning Sun recently ran an article about a local artist with an exhibit called Organic Dance. Photo by Sean Steffan of The Morning Sun.

If you find fluid movement to be awkward in your body, use this sculpture by Pittsburgh artist Jake Steven Fincher as an inspiration to move. Line your body up to mirror the first column in the exhibit and then imitate the second then flow into the third and down the line. It’s no wonder that Fincher calls this piece Undulation. The solid pillars move and it stimulates fluid movement in the viewer as well.
Fincher’s exhibit at the Harry Krug Art Gallery at the Pittsburgh State University through mid-January.
Posted by Anita Boser at 10:17 AM No comments:

Does your body make noise when you move? Such as:
--> Crunching when you roll your shoulders.
--> Knees snap and pop on stairs.
--> Back cracks when turning.

There’s no need to freak out over the sound of crunchy muscles. They are, however, a warning to proceed with caution. The noises come from hardness in the body, such as calcification in muscles and fascia or tight ligaments and tendons, where there’s supposed to be suppleness. It’s as though the soft tissues are turning to bone.

To avoid the crunching, many people stop moving. Unfortunately, this makes the situation worse. Nutrition starved muscles stay surrounded in metabolic waste, including calcium that forms into crystals. Ligaments become malnourished since they depend on movement for fresh blood flow. Tendons that stay still become tighter.

An “all or nothing” attitude toward exercise gets us in trouble. Ignoring the sound’s messages is just as damaging as being stopped by them. Here’s an example from my personal experience. My hips used to pop when extending my legs. How interesting, I thought. Will it pop again? Yes. And, again? Yes. After a few times it would start to hurt. This was because the iliopsoas tendon was snapping over the top of the hip joint. Each pop was alerting me to damage.
The answer was to extend my hip in a way that didn’t create a popping sound to stretch the muscle and tendon at the limit without pulling it off track.

The noises from your knees may be telling you that you’re wearing one side of the joint more than the other. Running up and down the stairs without awareness ingrains patterns of misuse. Slow down so you can pay careful attention to your alignment with the knee coming straight over the middle toes. Also try to lean forward a bit at your hips, especially when going down the stairs. Find the alignment to avoid the pains and pops and you’ll create less wear and tear.

Tension around the shoulders is so common that almost everyone has calcification in the tendons and muscles around their shoulder blades. The hardness can melt, however. This is one of the reasons people seek deep-tissue bodywork. Fluid movement such as small shoulder circles can also dissolve the crunchiness. Make circles forward and back and also sideways over your ribs.

When you hear the snap, crackle and pop of petrified tissues watch your alignment and use your movement to restore fluidity.
Posted by Anita Boser at 1:29 PM No comments:

The energy of the natural world encourages us to slow down as winter approaches. Nights grow to maximum length and facilitate more sleep. Slick roads necessitate slower speed to stay safe. Cold weather hampers outside exercise.

The social world encourages us to do more during December. Decorating, sending cards, baking, parties, shopping, trips to the post office, travel, and more are packed into the time between Thanksgiving and New Year’s.

Finding time to rest this month will help you tune in to the natural rhythm of life and give you more energy to enjoy yourself. That’s why this month’s exercise is to practice relaxation with the Constructive Rest Position.

Traditionally, the constructive rest position is done with both feet on the floor with the physical aim to release the iliopsoas muscles. It's used to counterpose psoas strengthing exercise such as Pilates and can be helpful in alleviating low back pain. The photo above shows a variation with is more restful: raising the legs and resting them on a chair.

Steps:
1. Lie down on your back with knees bent and feet on the floor or calves on a chair.
2. Place a small towel under your head if needed to keep your neck in line with your spine as shown in this Alexander Technique description.
3. Place your arms in a comfortable position, by your side or on your torso.
4. Quiet your mind and rest for two to twenty minutes.

For me, the Constructive Rest Position is like a power nap without the side effect of waking up groggy. If you’re short on sleep or feeling frazzled, try it and give yourself a boost.

Posted by Anita Boser at 5:54 AM No comments: 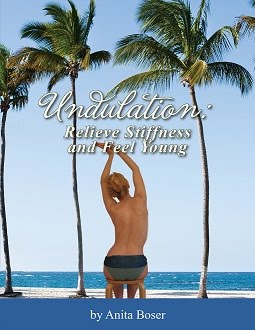 Like our page for fun and informative posts Undulation Exercises

Anita Boser
As a Certified Hellerwork Practitioner, Board Certified Structural Integrator, Anita helps her clients regain fluidity, alignment, and vitality with a combination of bodywork, awareness dialogue, and movement education. She is a human movement expert with experience in belly dancing, yoga, and daily undulations and author of "Undulation: Relieve Stiffness and Feel Young." 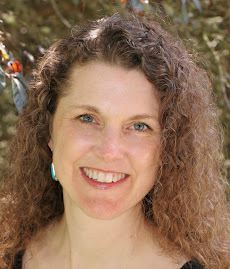